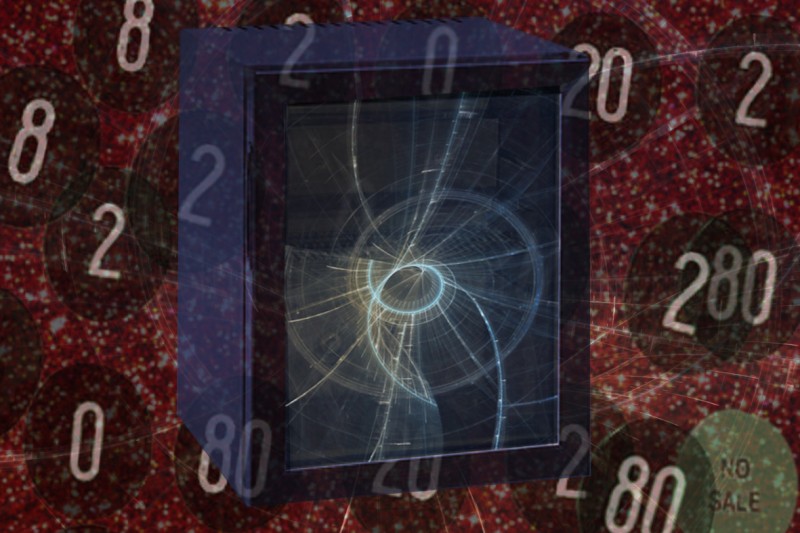 He’s serving in an old dusty shop selling hats, birds in cages, glittery high heeled shoes in tall glass cases, Lyn is wearing a fur collar, browsing and asks how much a leopard costs and Pete says ‘Twenty-two thousand eight hundred and eighty-eight quid two pence.’ Lyn is older, MILF-like, she says, ‘I don’t want a leopard at that price, how much do those cost?’ pointing at a bag made out of a frog still breathing. Pete says, ‘Eight hundred and twenty-eight quid.’ ‘Alright,’ she says, ‘I’ll have a beer.’ So Pete pulls her a beer from the pump beside the old cash register and says, ‘That’ll be eight-twenty-eight then.’ and she says ‘Does everything cost eights and twos?’ Pete says, ‘Yes only those keys work kerching!’ and she says, ‘So no ninety-nines, no sixty-nines, no four by fours kerching!’ and she is not a MILF anymore but a tall bloke who has has a tattoo on his cheek and a kind smile but says, ‘You’ve got my fridge and I need my fridge to sleep in.’ Pete feeling panicky says, ‘That little fridge isn’t big enough for you and anyway where would I put the hats.’ The tall man says, ‘Unless you give me my fridge I’ll cut you up, my name isn’t Harry for nothing.’ So Pete gives him the fridge for twenty-eight pence and when he opens the cash register the trays are all full of wobbly lime, strawberry and lemon laughing stuff all sticky on his fingers instead of change.

Pete opens his eyes and she is looking at him, from inches away.

‘Only for a second.’

‘Kind of a blokey thing eh? To fall asleep. After.’ He reassembles: the red dress, her face above him, her throat, the weird sound she made freaked him at first then he liked his thumb on her vibration. How she laughed, kept asking him even though he’d told her, ‘Whatexactly isit youdo?’ over and over, and over and over he replied. ‘I’manelectrician.’