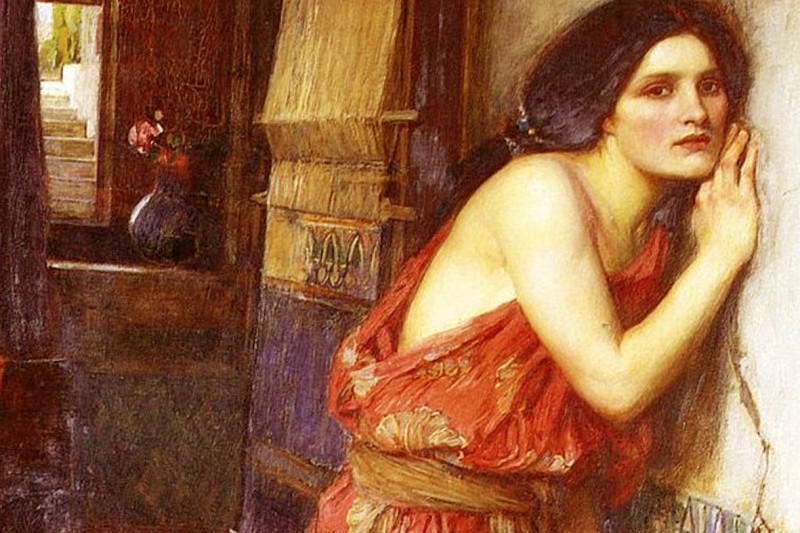 Hot from the shower, Lyn sits in her bra and pants, with a towel round her hair and, saying it like Alan Lumb/Bennett out loud, ‘Gooooogles Pyyyyr-imooos an’ Thiiiiiis-b.’

Wikipedia: “In the Ovidian version, Pyramus and Thisbe is the story of two lovers in the city of Babylon who occupy connected houses/walls, forbidden by their parents to be wed, because of their parents’ rivalry. Through a crack in one of the walls, they whisper their love for each other. They arrange to meet near Ninus’ tomb under a mulberry tree and state their feelings for each other. Thisbe arrives first, but upon seeing a lioness with a mouth bloody from a recent kill, she flees, leaving behind her veils. When Pyramus arrives he is horrified at the sight of Thisbe’s veil, assuming that a fierce beast had killed her. Pyramus kills himself, falling on his sword in proper Roman fashion, and in turn splashing blood on the white mulberry leaves. Pyramus’ blood stains the white mulberry fruits, turning them dark. Thisbe returns, eager to tell Pyramus what had happened to her, but she finds Pyramus’ dead body under the shade of the mulberry tree. Thisbe, after a brief period of mourning, stabs herself with the same sword. In the end, the gods listen to Thisbe’s lament, and forever change the colour of the mulberry fruits into the stained colour to honour the forbidden love.”

Mm. Bloody tragedy. No oranges. Blood orange. She takes a glass of wine into the bathroom, nips back for her phone, thinks about texting, doesn’t want to seem too eager.

In front of the mirror, she pulls the towel across her mouth and nose and tilts her head thinking, Veils!  Ha!