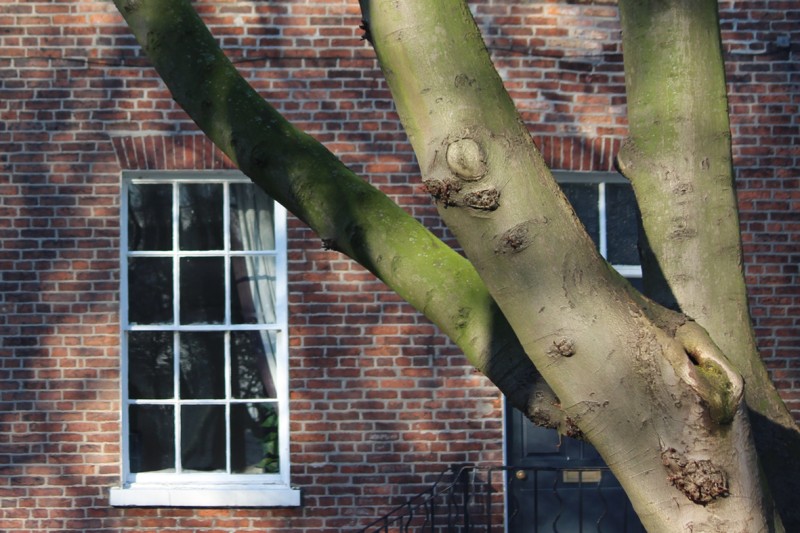 Alan Lumb opens his door and lets Lyn into the hallway of his ground floor flat. She has never met anyone who smells so strongly of tea – somewhere between Earl Grey and chamomile. He is younger than his twitter photo and doesn’t really look like Alan Bennett, though he sounds like she remembers Alan Bennett reading on the radio.

‘You work in the library.’

He smells of tea or rope, the hall of dust and old books.

‘What do you think of it now?’

She should be loyal and shouldn’t slag the new building off just because she now gets a constant view of her thorn mast.

He doesn’t give her time to reply. ‘A vast improvement. The museum too, I take it you have seen the cayman and his friend the monkey’s arse? Any public institution that displays a tax man made from a monkey’s arse deserves to be supported.’

‘I think it was customs wasn’t it?’

He taps a tupperware container he has picked up from the hall table, ‘Your mulberries, you can drop this off when you’ve done. What are you making, vinaigrette? They make a good vinaigrette if you’ve only a few, I do a cordial now, my wife used to make a gin. Pyramus and Thisbe.’

‘Everyone goes on about the mulberry tree in the prison but they forget about Pyramus and Thisbe, Wakefield couple.’ He smiles, ‘From way back, hole in the wall. You know the story?’

Lyn wants to ask, How old do you think you are? Not much older than me, and if you chose proper clothes, stopped all the old gaffer stuff and didn’t sound like Alan Bennett you’d be quite good looking.

She hangs a minute, feeling the slight weight of the mulberries slipping softly across the container, but he doesn’t offer her tea.