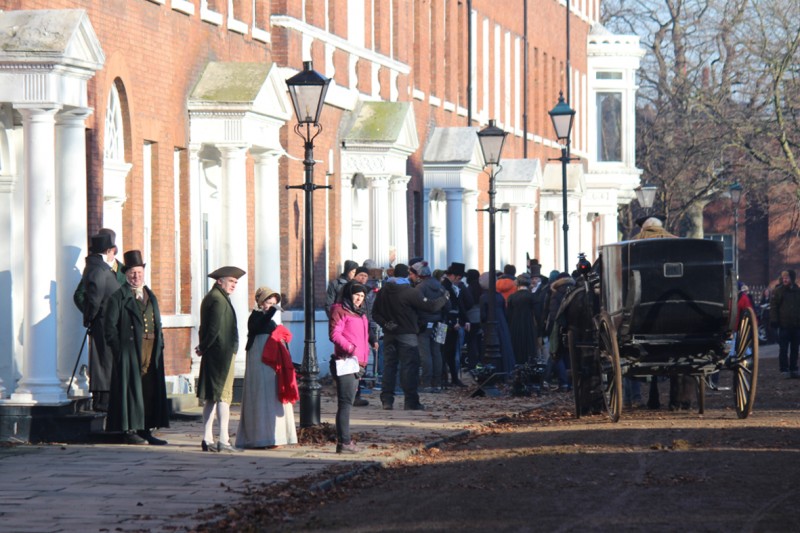 A shaved head in a yellow jacket stops Clara, ‘You can’t go that way.’

A huge motorised green screen is being moved across the end of St. Johns North.

Soil on the street, lights, too many people for any job. Suddenly she is unreasonably furious, and although she never intended to go that way says, ‘But I need to go through. You can’t stop me walking in my own city just for another bloody costume drama.’

‘Thank god for that.’

‘Come on, you can get round next on the right.’

She is drawing attention. ‘No one’s filming anything, they’re just standing about, look all the cameras are on the ground.’ A line from Herta Muller, clear in her head as if she were reading, “A child is afraid of dying and eats even more green plums and doesn’t know why.”

Clara pushes past the security man, hears his ‘Oi, oi!’ feels the soil give under her feet, slips a little as she goes up to an actor in a green coat and asks, ‘Tell me, where are you supposed to be?’

A woman in an anorak asks in a thick middle European accent, ‘What are you doing? Why are you here? Simon do you know her?’

Clara, head held high, walks the length of St Johns North, he shoes slipping sideways on the soil, she smiles at the actors, the crew and, to her horror, finds herself smiling and nodding at the horses too until she is through the zone of make-believe and out onto Leeds Road. OLD NAG SMILES AT HORSES. CRAZY WOMAN NODS AT PEOPLE SHE DOESN’T KNOW IN STATIONARY CARS. CLARA FINDS SOMEWHERE TO CALM DOWN.